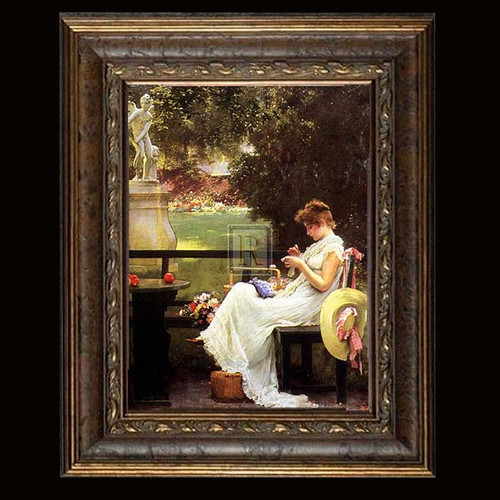 About the Artist
Marcus Stone lived from 1840 to 1921. He was the son of the printer Frank Stone, who turned to art after an early career in his father's cotton-spinning business.
Marcus Stone, a historical genre painter and illustrator, studied under his father. He was a close friend of Charles Dickens and as a young man illustrated the original editions of Great Expectations and Our Mutual Friend. After considerable work as an illustrator, he chose to specialise in sentimental paintings with enigmatic titles which, like so many Victorian paintings, were designed to tell a tale.
Stone painted mainly genre scenes set in the 18th century or in which his subjects wore Empire costume. The themes are usually dramatic, sentimental or humorous.

About the Print
This print is finished with a matte "textured" coating, which gives your art an elegant appearance. Then, we framed it in our F4328 "masterpiece" frame, giving a museum quality appearance. All of our richly designed frames have an antique finish with subtle accents to highlight the intricate detail, then a low sheen sealer is applied. The Watermark in the center of the images will not appear on final art.

About the Frame
These masterpiece frames are made of solid wood, with the exception of the F3242 frame, which is cast resin, and then covered with an outer layer of sculpting material called Gesso (pronounced like Jesso). You can see this outer layer on the side views of the frames. Gesso is a traditional mix of a glue binder, chalk, and white pigment, used to coat rigid surfaces, such as wooden painting panels as an absorbent primer coat substrate for painting. It is also used by sculptures to prepare the shape of the final sculpture (fused bronze) or directly as a material for sculpting. Gesso can also be used as a layer between sculptured wood and gold leaf. A collection of gesso sculptures is properly called gypsotheque. Please allow 5-7 weeks for this work of art.

Young Woman Reading By A Window

One Of The Family