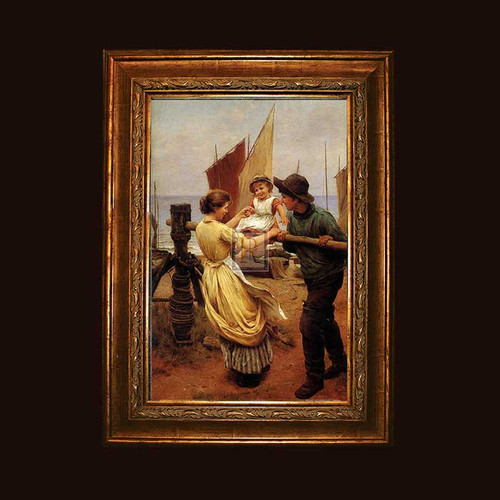 About the Artist
George Swinstead lived from 1860 to 1926. Born into an artistic family, as his father Charles and brother Alfred were both accomplished painters. In 1881 George Swinstead entered the Royal Academy School and a year later he held his first exhibition there. Although for many years his principal work consisted of portraits and genre, he also devoted much time to the coastal scenes on which his exhibitions concentrated in later years.

About the Print
This print is finished with a matte "textured" coating, which gives your art an elegant appearance. Then, we framed it in our F4318 "masterpiece" frame, giving a museum quality appearance. All of our richly designed frames have an antique finish with subtle accents to highlight the intricate detail, then a low sheen sealer is applied. The Watermark in the center of the images will not appear on final art.

About the Frame
These masterpiece frames are made of solid wood, with the exception of the F3242 frame, which is cast resin, and then covered with an outer layer of sculpting material called Gesso (pronounced like Jesso). You can see this outer layer on the side views of the frames. Gesso is a traditional mix of a glue binder, chalk, and white pigment, used to coat rigid surfaces, such as wooden painting panels as an absorbent primer coat substrate for painting. It is also used by sculptures to prepare the shape of the final sculpture (fused bronze) or directly as a material for sculpting. Gesso can also be used as a layer between sculptured wood and gold leaf. A collection of gesso sculptures is properly called gypsotheque. Please allow 5-7 weeks for this work of art.

Day On The River