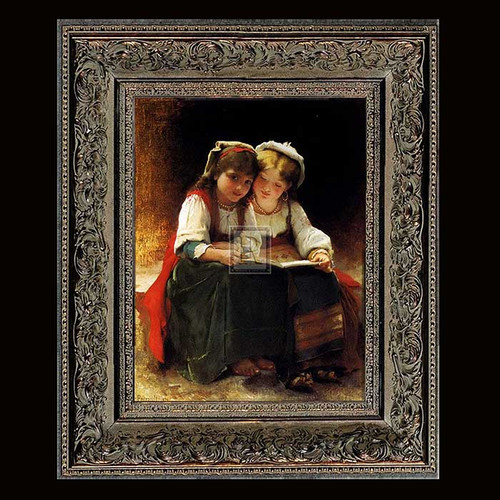 About the Artist
Leon Jean Perrault lived from 1832 to 1908. He was a painter of genre and historical portraits of Paris, born at Poitiers. He studied under Picot and Bouguereau and made his debut at the Salon in 1861. He was honoured with a Medal in Paris in 1864, 1876 and 1878, and in 1878 won a Diplme d'Honneur. He became a Chevalier de la Lgion d'Honneur in 1887, obtained a Bronze Medal in 1889 and a Silver Medal in 1900. He painted the marriage room at the Htel de Ville de Poitiers.

About the Print
This print is finished with a matte "textured" coating, which gives your art an elegant appearance. Then, we framed it in our F6502 "masterpiece" frame, giving a museum quality appearance. All of our richly designed frames have an antique finish with subtle accents to highlight the intricate detail, then a low sheen sealer is applied. The Watermark in the center of the images will not appear on final art.

About the Frame
These masterpiece frames are made of solid wood, with the exception of the F3242 frame, which is cast resin, and then covered with an outer layer of sculpting material called Gesso (pronounced like Jesso). You can see this outer layer on the side views of the frames. Gesso is a traditional mix of a glue binder, chalk, and white pigment, used to coat rigid surfaces, such as wooden painting panels as an absorbent primer coat substrate for painting. It is also used by sculptures to prepare the shape of the final sculpture (fused bronze) or directly as a material for sculpting. Gesso can also be used as a layer between sculptured wood and gold leaf. A collection of gesso sculptures is properly called gypsotheque. Please allow 5-7 weeks for these works of art.

An Armful Of Mischief